I have been very behind on the blog front lately as we’ve been so busy, so expect an onslaught of blogs this week!  We were at Audley End House, Essex over half term running our Victorian toys display.  We’ve been at Audley many times before, mostly in 1940s togs.  This was the first time we’d been there in February.  On the first day we were set up outside on the main lawn but it was extremely chilly out there and the site staff kindly offered us use of the education room with 4 lovely walls and a snug heater to keep us warm!  The croquet was set up on the picnic bench lawn next to the topiary hedge & shop with various other toys around the courtyard or in the room. 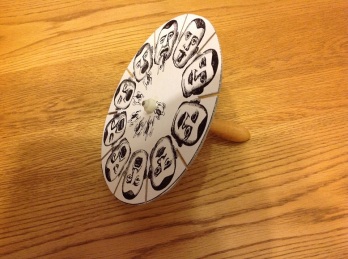 The croquet has proved really popular and Wel spent most days outside teaching people the game.  One family even came back for a second day as they’d enjoyed the first day so much!  If space permitted we could set up 3 sets at the same time and they’d all be occupied.  Wel said that most people turned up to play but did not understand the rules of the game and were just hitting the balls.  Some were even playing with the mallets sideways!  Many with the mallet beside them and not swung between the legs, which gives more control.  We’ve dediced to make a ‘How to’ photo display sheet for the future of does and don’ts.

We were really lucky with the weather during the week and it was mostly sunny during the days.  We were expecting snow as it was forecast the previous weekend but it didn’t happen.  We were pleasantly surprised at the number of people out on a February half term, especially on the last day of the event.

The optical toys such as the zoetrope were popular as ever and we’ve decided to invest in more of these for the future.  I have a hankering to make a peepshow, which sounds much lewder than it is! Cardboard versions of these were made for the great exhibition at Crystal palace, where you look through the hole to see a scene of the exhibition.  I can recall making something like this as a kid and being thrilled with it, so I think I’ll make one for the next time we run this display.  We love this display and I think it’ll go from strength to strength!

Deck quoits became a popular past time in the 19th c and would be played on board ship by passengers.  It’s another huge favourite amongst families.

I recently (2018) made a decision to live a more plastic free life. This blog documents my successes and failures and is a way to encourage me on in my move towards a plastic free life.
View all posts by kazhoney →
This entry was posted in Victorian. Bookmark the permalink.
%d bloggers like this: