Think that fairies aren’t part of history?  Think again!  Two very peculiar Victorians, Thadeus & Eliza will delight your visitors young and old with their collected tales of the many types of fairy folk to be found around Britain.  Belief in fairies has been a strong part of British history & folklore for many hundreds of years.  Over the centuries people have been delighted and scared of them.  All our tales are either actual stories that were told in the 19th century & earlier or are based on the beliefs if we felt the original story was too scary for modern children.  Some fairy folk are good and can be kind to people helping them with tasks, fixing things etc and these fairy folk are part of the Seely court but equally some of them can be very mean and lead people into danger or be very mischievous.  Fairy folk like these are called the Unseely court.  We tell your young visitors how to look after the good fairies and what to do if they meet one of the bad ones!

This display is run as timed talks around your grounds and ideally needs a few dark nooks, crannies & trees for us to search around.  It’s great for encouraging exploration, interaction and imagination around your site.  Fairies are found in all sorts of locations, woods, houses, bridges, rocks, caves, fields, lakes and we can relate our stories to your site.  Each hunt lasts about 30-45 minutes.

In the late 19th century some extraordinary Victorians realised that belief in fairies was starting to wane with large numbers of people moving to cities and the advent of free education for all.  Most of the traditional stories were known and related by the everyday poorer folk of Britain and thus were not always written down, so they set about recording many of these wonderful stories for posterity before they were lost.  Many of the stories are very moral & relevant still to modern life with rewards for the good, hard working and virtuous and punishments for the bad. The fairies really don’t like people that are lazy, disrespectful or don’t believe in them!

he types of fairies you might meet.  There are also a few props and effects on the route to help liven the stories.

Will O the Wisps, Pucks, Hobbledy Lanterns, Pinkets
Will O the Wisps, appear as strange lights seen on the road at night by travellers.  They are brighter than a candle flame and they often lead people off the road and into dangerous bogs.  They are definitely part of the unseely court!  Many places in Worcestershire are named after them.  Similar good folk can be found in other parts of Britain.  Below is a video of one that Eliza & Thadeus found on one of their recent hunts in Worcestershire.  It was found hiding in a tree.

Brownies & Boggarts
Brownies are good fairies that live in houses with people. They don’t generally live with other fairies.  They are described on average as being 18 inches tall, although can be up to 3 foot.  They undertake helpful tasks around the home, cleaning, setting fires, feeding animals.  Basically all the jobs that the servants (or shall we call them parents!) don’t have time to do.  You should look after your brownie if you have one by giving it a bowl of cream or a cake spread with honey.  But never thank your brownies or tell them that the food is a gift or they stop work and leave!  Just leave the food somewhere for the brownie to find. 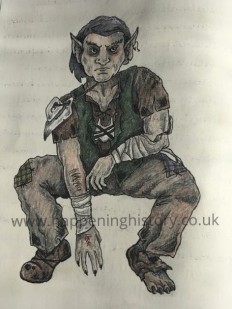 If you really upset a brownie it will change into a boggart!  Boggarts make a real nuisance of themselves, making noises, banging pots and pans, hiding things, making messes.  In fact they sound exactly like poltergeists which would perhaps be a more modern explanation for one.  They of course look much like brownies but are more wild and unkempt in their appearance.  Make sure your good to your brownie so you don’t end up with one of these in your house. Our beautiful illustrations will help your visitors to visualise what these folkloric creatures look like.

Two types of good folk that you’ll find down in Cornwall are Piskeys & Knockers.  Piskeys are much naughtier than their kinfolk the pixies in the neighbouring county of Devon.  They can range in size from tiny to about 3 foot tall.  Some people believe that they are shrinking over time and one day will disappear altogether.  We relate to your visitors the wonderful story of the small peoples cow, where piskeys were taking milk from a dairy cow called Rosie.  They looked after Rosie very well, feeding her lovely herbs and taking ticks from her ears.  One day the milk maid having picked a 4 leaf clover could see hundreds of fairies all around the cow, using buttercups to collect milk and arriving riding on hares.  The farmers wife was so greedy though she put salt all around Rosie and on her udder so the piskeys who don’t like salt couldn’t get the milk.  But the piskeys showed the farmers wife, all the milk dried up and when the farmer tried to sell Rosie, she ran away!

Knockers on the other hand live underground in the tin mines. Cornwall has a big history of tin mining and the miners have long believed in these wee folk.  They can be extremely helpful to miners, warning of impending cave collapses by giving their knocking warning or showing miners where to find hidden seams of the metal.  We relate the story of a wise old miner who had an agreement with the knockers and his rather greedy & foolish son who broke the agreement his father had made by taking all the tin for himself.  When many of the Cornish miners moved to America, it’s said that some of the knockers moved with them and became Tommy Knockers.  Many believe the knockers to be the spirits of former Jewish miners. 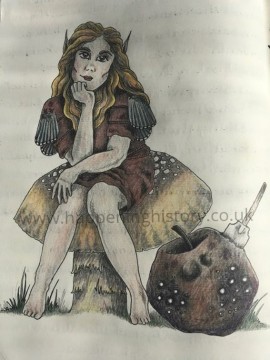 Pharisees
Many people believe that the only place that the good folk (fairies are just a name we people give them) are to be found is in the west country, Wales or Ireland but in truth every part of Britain has its beliefs.  The type of fairy that’s found in the counties of Sussex & Suffolk are called Pharisees (basically a double plural of the word fairies).    Like brownies they are mostly good, helping humans with tasks, unless you upset them.  They really don’t like people that don’t believe in them.  Eliza is lucky enough to have a Pharisee story that relates to her own family, which comes from Sussex about a young ploughman called Charles Packham, who helped a Pharisee by mending her

broken bread peel. Mary Ann Packham was told the story by her grandfather when she was just a child at his knee and this has inspired her into a life long love & belief of  fairies.  Eliza still has the mended tool that her grandfather found on his doorstep years later.  She treasures it and shows it proudly to the visitors.

These are just a few of the types of fairies we might talk about, if you give us plenty of notice before hiring us we can arrange to talk about any fairy folk relevant to your particular area.

Our stories are inspired by the wonderful ‘A dictionary of Fairies’ by Katherine Briggs & Simon Young & Ceri Houlbrook’s wonderful new book ‘Magical folk’.  Both books relate the many collected stories of older writers.