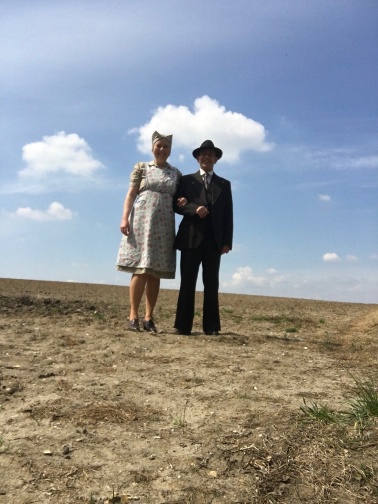 Blue Skies, nothing but blue skies…

We had two different jobs in the pipeline for the 75th anniversary of VE day, both of course did not happen due to Corona Virus but we were determined not to be down about it and set about creating our own VE day celebration of sorts.

We dug out our WW2 outfits from the cupboard, lockdown has made me pile on the pounds so I had to do a bit of make do an mending on an original 1940s dress that had been languishing at the back of my cupboard, that was gifted to me on my 30th birthday.  Once done, we started the day with a walk in our 1940s clothes.  It was a glorious hot day and there were quite a few other walkers using ‘shanks pony’ to get their alotted hour of excercise.  A lot of them were really pleased to see us dressed up and commemorating the day.  We sauntered down the pretty back lane of the village and up past the local primary school and out into the country,  trying to source some foods to forage as we went.   We found nettles and Jack by the hedge.  It was often a job of children and women during the war to collect wild herbs, such as stinging nettles, which, if memory serves me correct, were used in asthma medicines.   My village is often thought of as an ugly village but that’s because people who don’t live there rarely see all the medieval and Tudor houses tucked around the back.  It has its fair share but they are rather more spread out than other villages as they were once several hamlets which have now all joined together. 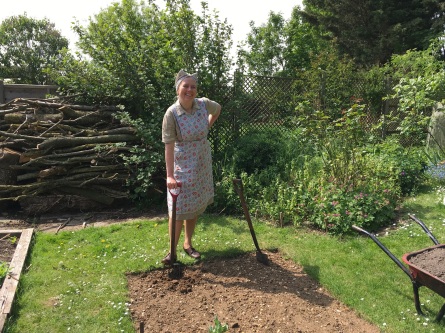 Digging up the lawn to grow veg

Then back home for some digging for victory.  As happened during the war, we’ve turned a lot of our garden over to growing  fruit and veg.  Some of which won’t be ready this year but hopefully in a couple of years we might have some lovely Bramleys.  Every pot and container has been put to good use and my old oat milk cartons and tins have become plant pots.  Part of our lawn has been dug up and old soil delivery bags now contain onions.  I’ve been saving old food scraps of cabbage, lettuce, celery and broccoli to try to regrow food from the stalks.  Some of which are now happily rooting in my soil.  Regrowing food from scraps has been a recent and much welcomed revolution in my life at present.  It is a notion that would have fitted well with the 1940s mentality. 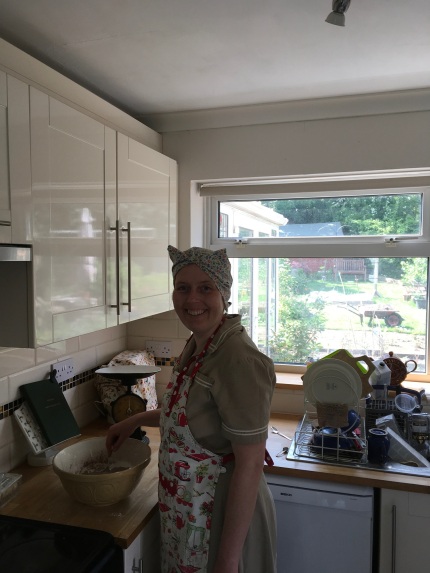 We had heard that an impromptu social distancing street party was happening in our cul de sac, so we set about baking some buns.  We followed a recipe from Marguerite Pattens Victory cookbook.  I was lucky enough to meet her in person at a special event held at the Cabinet War Rooms in London, some years back and I have some signed editions of her books.  We followed a recipe for eggless chocolate buns, which again seeemed very fitting as eggs are in short supply in our house at present.  They were made using bicarbonate of soda and baking powder.  I’d never made cakes in a similar way before but they rose beautifully.  Despite all the sugar and the golden syrup, they weren’t very sweet tasting. 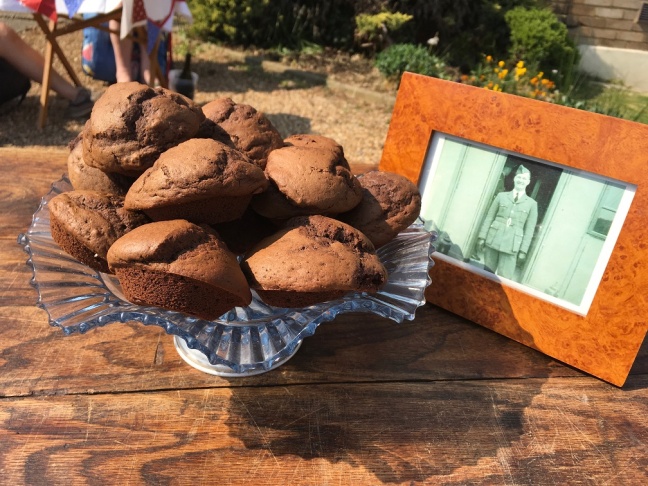 Eggless Chocolate buns, more like a fairy cake than a bun

Wel at our 1940s table and chairs, chatting to the neighbours

After listening to Winston Churchill’s war time speech at 3PM, we went outside to join our neighbours, everybody was sat at their own little table.  We were sitting on 2 chairs which had both been made in the village at a place called Rippers during the war and had been sold to me by a woman called Lorna.  The War department stamp is visible on the bottom of 2 of them.  Her dad had brought them home many years ago.  We all sat near enough so we could hear each other and we moved our chairs around to chat to different groups.  Lots of people were out in their front gardens on our estate and it was a joy to behold so many people making an effort.  Bunting and flags were flying everwhere.   Those that have lived here longer than us shared their memories of what the village used to be like.  Our new found friend Jo even showed us the wonderful 3D stereo viewer she had that dated to the 1930s, all with 3D images of her family.  A lot of people were drinking their home made brews like us, (mine was mead) and had baked cakes for the occassion.  I was very proud to share a book I’d had printed of my grandfathers war memories.  He had served in the RAF out in india during WW2 with a glider squadron and I was thrilled that my neighbour wanted to borrow it.

We rounded our day off with a little sing song in our living room.  The sentiments of the song, do seem to reverberate in these modern times.  We hope that this current situation is short lived and that we really will meet with you all again, very soon.  We wish you all the best.

I recently (2018) made a decision to live a more plastic free life. This blog documents my successes and failures and is a way to encourage me on in my move towards a plastic free life.
View all posts by kazhoney →
This entry was posted in Just for fun, VE Day, WW2 workshop and tagged VE Day in Lockdown, WW2. Bookmark the permalink.
%d bloggers like this: