We were very honoured to have been invited to attend the Harrington Companye Banquet yesterday.  It took place in a small village hall near Northampton.  It’s the first medieval banquet that we’ve been to in a long while and it was a great opportunity for us to relax and make some new friends.

We all arrived about 5PM to start setting out the

hall.  With many hands helping out, the hall was soon festooned with brightly coloured banners, the tables were bejewelled with candles, greenery and everyone’s finest tableware, which sparkled and shimmered in the candlelight.

It gave us an a chance to get out our gorgeous majolica aquamanile.  We bought it from Trinity Court Pottery some years ago and had once christened it with hippocras.  We’d made a promise to Jim the potter when we bought it that we’d use it for the purpose it was intended, so here it was again.  The hall was soon transformed and everyone excitedly changed into their finest attire ready for the feast & revels. 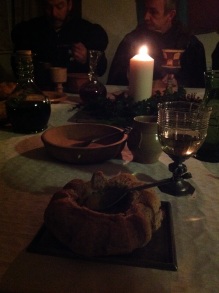 The feasting began about 7PM.  We’d been told that there were some great cooks in the Harringtons and we weren’t disappointed.  We started with a lovely vegetable pottage served in a bread trencher.  This was followed by the mains, which was an amazing vegetable, bacon and cheese pie with roast pork and roast roe deer.  Everyone agreed the pie was amazing.  I can’t recall the name of the dish but I know that they’d researched lots of authentic recipes as they’d borrowed our medieval recipe books.  The venison was especially fine and not too gamey.    Then dessert was baked apples with a delicious period rice pudding recipe.  I believe they said it was made with almond milk.  Almond milk was quite common in medieval recipes, especially during lent.

There were entertainments in between courses too, there were some amazing  & beautifully sung medieval carols.  At the end of the night we were entertained by a wonderful mummers play, all performed by members of the Harringtons. You can see one of the sings being performed here:

Finally, awards were given at the end of the night to members of the household who had worked hard and done well this year.  To finish there was time for us all to join together in a few songs such as ‘Three jolly coachmen’, a bit like this but not quite as good! (Three Jolly Coachmen).

Sadly the night was then over and we all had to clear up and go home.  Strange to suddenly see everyone back in the modern world, I felt like the ‘Lady after the ball’, a poem from my childhood, who looks glamorous and beautiful at the ball, then goes home, takes off her wig and her wooden leg, takes out her glass eye and false teeth.  Back to the modern world it felt like a dream but hopefully we’ll return to the 15th century sometime very soon!

We both came away from the weekend, inspired with an enormously ambitious plan, which we may or may not be able to instigate but if we can we’ll share it here first!

Thanks to Matthew Crosby and the Harringtons for letting me use some of their photos for this blog and thanks once again for inviting us.

I recently (2018) made a decision to live a more plastic free life. This blog documents my successes and failures and is a way to encourage me on in my move towards a plastic free life.
View all posts by kazhoney →
This entry was posted in Just for fun and tagged banquet, Medieval Feast. Bookmark the permalink.