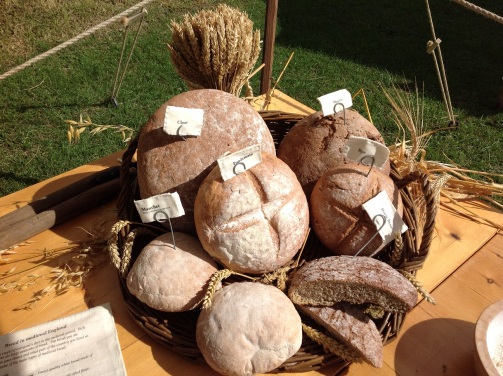 Last weekend we were running our medieval milling display at Dover Castle in Kent.  As part of the display we bake some medieval breads to show the public so on Thursday last I set about baking some of the breads that we need.

As nowadays, there was a vast array of different breads in medieval times, although not every bread was available to every pocket.  Wheat bread was largely a preserve of the wealthier folk of society.  The whiter the wheat bread, the higher status and more costly it would be.  The flour would have to be sieved several times to achieve a fine white flour.  The rich had various different loaves, manchets a type of large roll were the first bread that I baked.  I used a recipe

from Peter Brierly’s wonderful book ‘Cooking & dining in Medieval England’ although Elizabeth David also has a recipe for Manchets in her 1977 book ‘English Bread and Yeast Cookery’, hers is for a richer recipe requiring butter and milk.  Her recipe is a modernised version of a 17th century recipe for manchets by Lady Arundel.  The dough was wonderful to work.  Although I learnt to make bread purely by hand, I admit to cheating and using my Kenwood mixer as I was making such a quantity of bread, to save me time and my muscles from getting tired.  I then finished off the kneading myself.   It was a wonderful dough to work with and it rose beautifully.  It’s enticing smell filled the house and when they were baked, we could not resist cutting one to try.  It was absolutely delicious and ‘Mmmm’ was the only noise to be heard as we munched on the still warm buttered bread. 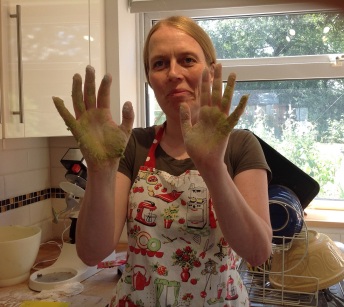 Next I made ‘Cheat’ bread.  Cheat was made from wheat flour that had the worst of the bran (skin of the wheat seed) sieved out.  Again I used a recipe from Peter Brierly’s book.  It was also a nice dough to work and rose tremendously big.  The recipe used a modern dried yeast as brewers yeast which was used commonly in medieval times to make bread is not easy to obtain and I had recently lost my sourdough culture through lack of use (reason being I am intolerant of gluten).  The main difference between using modern yeast and sourdough yeast is that the rising process takes longer and it imparts more flavour to the bread.  The slow rising breaks down the gluten in the bread more and is therefore supposed to make it more digestible than dried yeast loaves.  The recipe required 3lb (1.4kg) of flour so you can imagine how big the loaf was.  It is the loaf at the back of the basket in the photo above.

That took most of the morning, so after lunch I set about making ‘Maslin’, a bread made from a mix of wheat and rye.   I found no recipe in my books for this, the only guide being in E Davids book that it would be made from 85-90 % wheatmeal.  I made my loaf however on a 50/50 ratio of flours and it produced quite a nice loaf, though rather denser than the wheat loaves.  I was used to working with rye and wholemeal as generally when I make bread for myself, these are the flours that I use.  I went through a phase of making sourdoughs after a course I attended but it was hard to maintain a sourdough with my job, although my teacher did advise that sourdoughs could be frozen and suffer no great harm.  The dough was much looser and less formed than the wheat loaves.

Next, the final loaf I made was horse bread.  Horse bread as the name suggests was originally made for animal use but when times were hard and the crops were failing this too could become a bread of the poor.  It was made from peas, beans or whatever else was to hand such as bran.  The dough was more like a paste,  I added a small amount of wheat flour to make the bread stick together more it was a curious sticky dough and reminded me of the first story I wrote at secondary school for my English teacher, which was called ‘A nasty sticky mess’.  As I used pea flour, it was a wonderful vibrant green colour.  There was very little in the way of rising and the loaf it made was small and dense. I tried a piece that broke off but it was very unpleasant to taste.  I could see that it’d keep you alive but it afforded no pleasure to the taste buds.  The pea used in medieval times was the field pea, a close relation of the garden pea.  Yellow split peas are a modern 19th century invention to remove the outer skin.

I admit to buying my rye loaf as it was a sourdough and I could not have made a better loaf than a sourdough.  Rye was one of the main bread grains for the poor.  Although in the north of England, oat and barley were favoured.  Oat cakes being a northern speciality.

On Saturday morning, we trundled down to set up for the weekend.  The bread looked beautiful set out in its basket with ears of the different grains surrounding it.  We also brought along various different grains and the flours that they make to show everyone.  Some years back we had a woodturning friend of ours make some bowls for the display with the names of the various seeds and flours.

We also had our ‘horrid things you’d find in medieval bread’ box.  This displays some of the things which either went in by accident or on purpose by millers and bakers to bulk out the flour such as sawdust or chalk.   A dishonest baker would suffer the punishment of being dragged around the town with a loaf of his bread around his neck so that all might see he was a dishonest baker.   We also have an enlarged model of what the grain weevil looks like.  The adult female chews a hole in a grain and lays a single egg.  The larvae then grows and feeds on the inside of the wheat berry.  I once made a loaf of bread without realising that weevils had got into my flour, the bread tasted awful!! 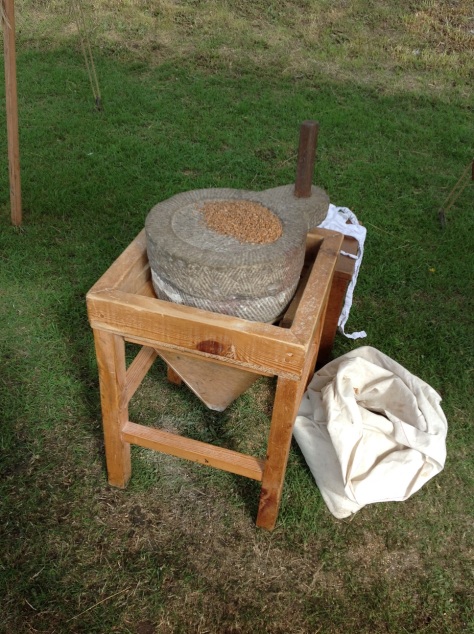 There was opportunity too to make flour on our hand quern.  Making flour this way is a curiously satisfying thing to do and the children were fascinated by it.  Many coming back several times throughout the two days to make more flour.

The only damper on the weekend was the atrocious weather, heavy rains on Saturday and gale force 6 winds on Sunday, which did not mix very well with flour making!

I recently (2018) made a decision to live a more plastic free life. This blog documents my successes and failures and is a way to encourage me on in my move towards a plastic free life.
View all posts by kazhoney →
This entry was posted in Uncategorized. Bookmark the permalink.
Loading Comments...