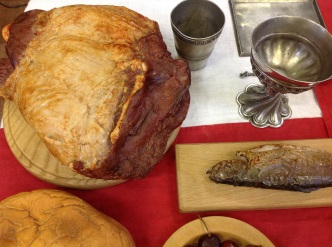 We have worked at this school for a number of years now, originally it was a girls school only but is now a mixed school.  We love coming back every year and it’s especially lovely to visit schools in the festive season, although traditionally it is our quietest time of year (lots of school plays and fetes happening which need the hall).

We’re real sticklers for turning up on time, so we usually arrive early at a site, rather than run the risk of being late.  Wel said we’d need to get up at 4.30am to set off for Lincolnshire.  Yikes!  So leaving the house at 5.30am we made our merry way and had such a good journey we arrived in Spalding at 7.10!

Our lovely teachers were there when we arrived to greet us and show us where to set up.  They have a lovely history team at the school.

The pupils started arriving at 9.20 for the first workshop, the first of 5 workshops during the day, all extremely excited.  During the workshops we looked at medieval clothing by dressing a boy up as Lord Tudor, a girl as Lady Beaufort and we talk about the clothes that they are wearing.  We use our finest clothes for this workshop, including a hennin and pouch I wore at my own medieval wedding.  The lion on the pouch is made of real gold thread. Basically a thread that has had gold wrapped around it.   We looked at what materials clothes were made from such as flax & silk and passed round silk cocoons for all to see.  We then had one of the students dressed as a priest, who married Lord Tudor to Lady Beaufort. This was a marriage that really happened in history, Margaret Beaufort was just 12 when she was married.   Her husband Edmund was twice her age.

We then had a wedding feast, which gave us a great opportunity to talk about the food of the rich and poor, as one of the other students is dressed as a peasant.  We looked at the types of food that the rich could afford such as meat, sugar, wines and spices and compared it to the diet of the poor, such as bread made from cheap grains or pulses, usually with grit in. Water or ale if they’re lucky.  Plenty of vegetables.  If they’re really lucky they might be able to afford to keep a pig.

Then it’s time for the armour & surgery section of the workshop. The students are given the chance to choose whether to learn about and try on armour or learn about surgery.  I am always surprised how many choose surgery, really a very large number, in most workshops I think it was half the class at least.  I’m very pleased as the armour is the more hands on section of the workshop but children are extremely interested in surgery and medicine.  I demonstrated on one of the pupils how an amputation was performed.  We also looked at blood letting and the live leeches with every group.  What I talked about varied with the chattiness of each group but we also looked at the wound man.  A wound man was an aide to memory to teach the surgeon.  We looked at tooth pulling (I have real teeth to show!), arrow pulling, uroscopy (examining wee by colour, smell & taste), and even trepanning with a couple of groups.

We were very pleased to hear from the teachers that the students remember elements of the workshop, even when studying other time periods later on.  Thanks to all the staff and students for another great day.  See you next year hopefully.